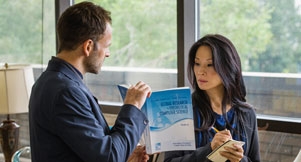 It’s always fun when things you like intersect, especially when math is involved! One of my favorite shows is CBS’s Elementary, so I was very excited when earlier this month there was a math-themed episode. In the second episode of Season 2, “Solve for X,” we see series regulars Sherlock and Joan investigating the death of a mathematician. As the mystery progresses, they realize that the murder victim was working on the famous P vs. NP problem, and may have been killed by a rival interested in claiming the Millenium Prize associated with finding the solution.

Aside from the initial excitement of seeing math on TV, I was impressed by how the writers handled the mathematical elements. I’m not very experienced with advanced computer science, so I can’t speak to how accurately the P vs. NP problem was addressed, but I thought the show did a good job of portraying its mathematician characters. While one character was a bit eccentric and had some rather unusual preferences for his problem-solving situations, the stereotypes of the wild-haired and/or potentially insane mathematician were largely avoided. Female and male mathematicians were both represented, and the story made clear that math is a broad field with a diversity of areas of research. The potential implications of the math involved were discussed in a way that is accessible whether or not you know advanced math, and were incorporated into an interesting mystery. I’m not sure how long it will be available for free streaming, but for now you can watch it here at TV.com.

Maya Sharma is studying for her MS in mathematics at Loyola University Chicago.
View all posts by Maya Sharma →
This entry was posted in Math in Pop Culture. Bookmark the permalink.