Posted on March 27, 2021 by Vanessa Rivera-Quinones

iRashida, is a blog written by Rashida Hakim, a junior computer science student at Caltech, where she shares “problems and ponderings in physics and math, with a sprinkle of computer science”.  In particular, she is interested in the algorithms used to implement machine learning and artificial intelligence. I was excited to find her blog and enjoyed reading many of her posts. In this tour, I summarize my favorite posts and talk to Rashida herself, to get to know more about the motivation behind her blog.

In this post, she discussed Benford’s law is named for physicist which gives a distribution for the first digits observed in datasets. In particular,  it states that the probability that some digit d will be the first digit is $log_{10}(1+ \frac{1}{d})$ (see Figure 1). 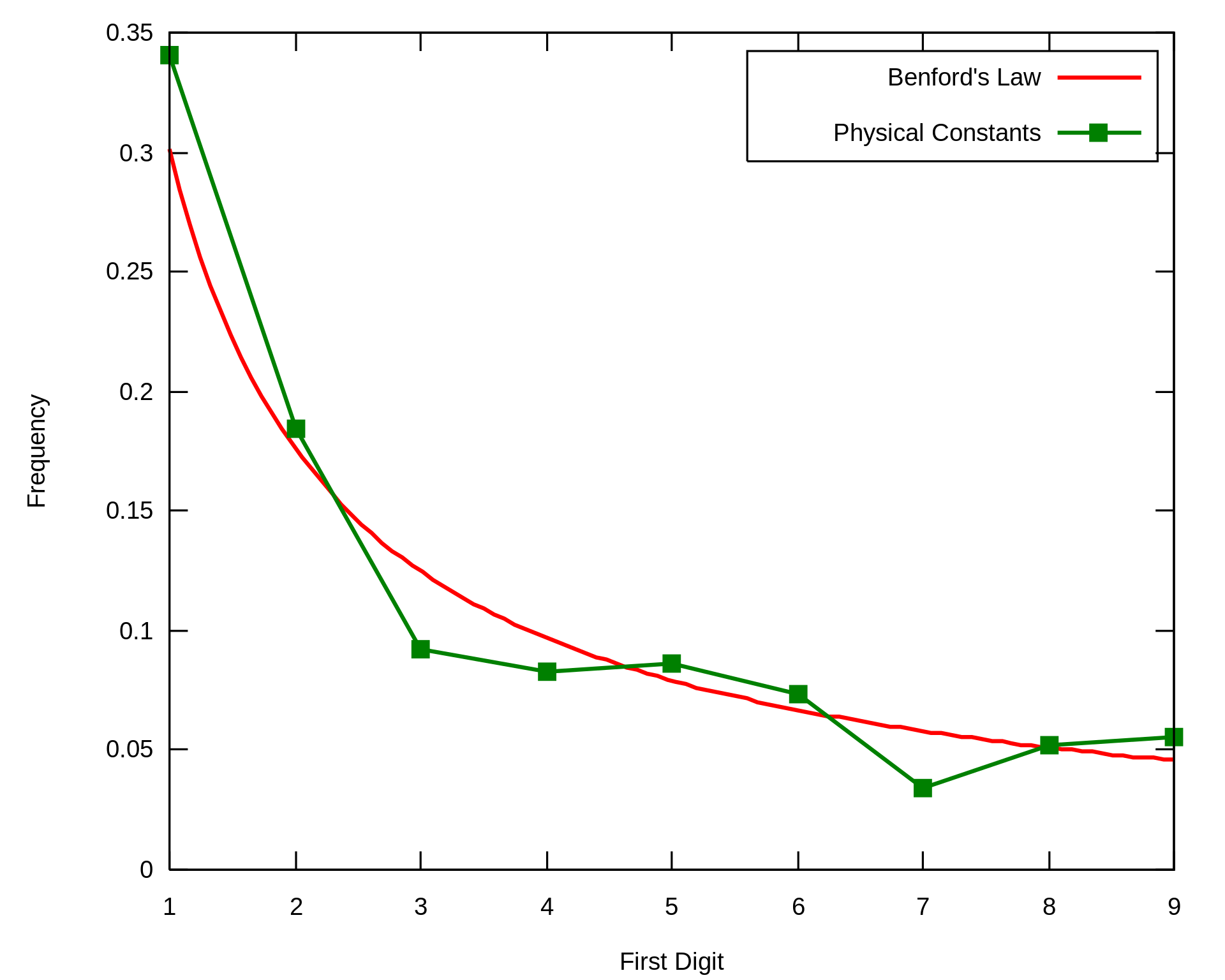 Figure 1. Plot of Benford’s Law vs the first significant digit of a set of physical constants. Public Domain.

She takes the reader through the intuition of the law using the circular slide rule, its generalization to other digits, and provides an example of how it has been used in the real-world as a way to detect fraud.  She ends the post by reflecting that one of the most interesting facts is that this law doesn’t apply to just numbers. For example, the natural numbers do not seem to follow this distribution. However, it says something about the real-word.

“The circular slide rule explanation exposes that exponential sequences and other multiplicative sequences should follow Benford’s Law. But does that apply to data sets of physical constants, or heights of mountains, or the masses of celestial bodies? All of these examples, and many more, have been observationally shown to follow Benford’s Law. Maybe the real discovery that Benford and Newcomb made isn’t just about digits, but about how multiplicative and exponential growth is inherent to so many unexpected corners of our universe.”

Riddle: “There is a line of 100 mathematicians, each positioned so that he can see all the hats in front of him but none of the hats behind him (nor his own hat). Each of the mathematicians is randomly assigned a colored hat, which is either red or blue. Note that there do not have to be exactly 50 of each color (since each mathematician’s hat color is independent of the others). Now the mathematicians are asked to guess the color of their own hat, starting from the back of the line and everyone can hear the guesses. Assuming that they are allowed to confer beforehand to discuss a strategy, what is the maximum number of mathematicians who can guess correctly?“

In this post, Rashida discusses how to solve this and variations of the riddle with logic and a bit of set theory. Turn out that in this more simple case all but one mathematician (the first) can guess their hat color correctly by using the formula below (see Figure 2).

She describes two variations of this riddle and their solutions. First,  replacing 100 with a countably infinite number of mathematicians, and secondly, what happens when no information is being carried forward when the mathematicians say their own hat color.

VRQ:  Can you tell our readers a bit about yourself and your blog?

RH: I’m currently a junior at Caltech studying computer science, but I started my blog as a high schooler. I started my blog as a way to remember cool math, physics, and computer science concepts that I learned through school projects or on my own. I like to do fairly long-form posts on a single subject that approach the subject from multiple angles. A concept inspires me to write a blog post when at first it seems simple (or is easy to introduce) but under the surface, there is mathematical complexity that I can really dive into. Over time, my blog posts have evolved to include more simulations and code (rather than pure math/physics) to match my evolving interests.

VRQ:  What is the most interesting thing you’ve learned through blogging?

RH: The most interesting thing I’ve learned through blogging is that you have to understand a concept really well (much better than you initially think!) to explain it to other people. It always surprises me how many unanswered questions pop up in my brain in the process of writing a blog post. And still, I sometimes get questions from my readers that I haven’t even thought about!

VRQ: What are some of your favorite blog posts you’ve written?

RH: One of my favorite posts that I have written was about Benford’s Law – which explains why some datasets have first digit distributions that aren’t uniform. I like that post because it is about a fairly unintuitive concept that shows up in a lot of places. Just recently, I got a lot of hits to that post because Benford’s Law was being (incorrectly) applied to find discrepancies in the 2020 election data. I hope after reading the post, people have the mathematical knowledge to debunk that particular bit of ‘fake news’ for themselves. Another of my favorite posts is about the optics of why rainbows show up. Most people know the basics of rainbow formation – water droplets in the air refract sunlight. But when you closely study the physics of just a single drop of water, you can learn so many new and interesting facts about this natural phenomenon. I like the post a lot because it taught me that it is worth it to go deeper, even on subjects I think I already understand.

VRQ: What are some of your favorite math blogs, if any?

RH: I love Ben Orlin’s ‘Math with Bad Drawings’ for insight on both math and math education. Also, it is often hilarious (if, like me, you’re the kind of person who laughs at geometry puns). I also enjoy David Richeson’s ‘Division by Zero’ because his posts are very interactive and make difficult geometry concepts accessible.

VRQ: Do you have advice for other students interested in creating their own blog?

RH: My advice is to focus on writing posts that excite you and that make you feel like you’re learning while writing them. That way, even if you’re not getting much engagement from readers, your blog is still a valuable learning experience for you.

Do you have suggestions of topics or blogs you would like us to consider covering in upcoming posts? Reach out to us in the comments below or let us know on Twitter (@VRiveraQPhD).